Students, staff and parents say they are pleased with Principal Kelly Cooper's dedication and transparency in opening of Northgate in a distance learning concept 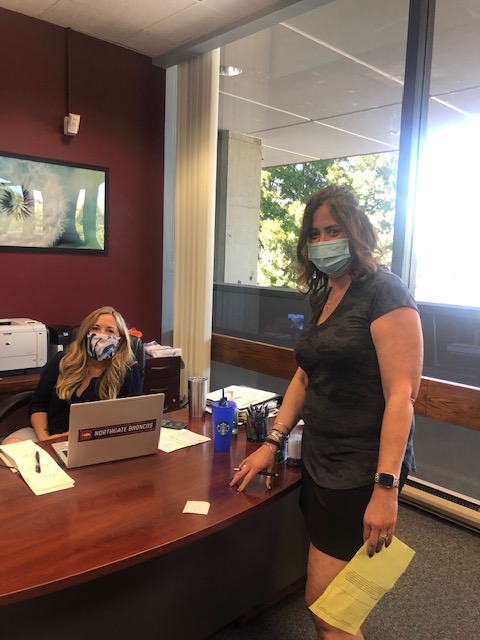 Principal Kelly Cooper, left, meets with art teacher Michelle Carmon, one of about 12 teachers who are teaching from campus by choice. Cooper, vice principals Craig Bocks and Kara Ravina and about 20 other staff members including teachers, clerical, library and custodial staff are working daily from Northgate.

Kelly Cooper, a school vice principal for the past three years, was named Northgate High School’s new principal in August. She takes the place of Michael McAlister, who announced his departure at the end of June. She also becomes the second female principal in the history of the Northgate, which opened in 1974.

Cooper becomes the top administrator about six months after a quarantine closed Northgate and most county, state, and national schools in an unprecedented time of a global pandemic. Her first weeks on the job presented challenges including planning for a hybrid or distant learning environment.

She brings nearly 20 years of education experience during which she has taught biology, physiology, Sports Medicine, Leadership, dance, and other PE classes. She worked first as the athletic trainer at College Park High School in Pleasant Hill, then at Ygnacio Valley High School in Concord, where she built the sports medicine course into a thriving program and collaborated on performing arts department musicals. She came to Northgate as a vice principal in 2017.

When asked about the changes she wants to make at Northgate, she laughed with a burst of enthusiasm. “What a funny question, because here I am thrown into a pandemic where absolutely everything has to change. Right?”

Cooper described a top goal of wanting to make an effort to include and engage student voices.“That is one of my goals – celebrating our students,” she passionately emphasized.

And she is already doing that. A few weeks into the year, Cooper supported the organization of a student forum that focuses on sharing student thoughts and experiences regarding different topics monthly. The first forum took place in September. She implemented student grade level google classroom sites for news and announcements specific to students in each level.

She is also connecting with students in smaller ways, supported by returning Vice Principal Craig Bocks and Kara Ravina, a new vice principal.

“We are making a lot of personal phone calls,” Mrs. Cooper says, as well as helping or “reaching out to students who we feel might be struggling.”

Senior Almeera Siddiqui said she has already noticed this change in student experience. Principal Cooper “has been very responsive and considerate of personal student concerns, which has helped transition into this year a lot better,” Siddiqui said recently.

“Ms. Cooper came into this job before a new year of complete distance learning that needed a clear-cut structure and a long-term plan as opposed to the emergency plan from last spring which worked but only for a short duration,” O’Steen said. “And now as we near the end of October and have finished a whole first quarter, we have a consistent weekly schedule, available access to teachers, administrators, counselors and other staff; and above all, patience and hard work from the principal during this different than normal school year.

Teachers said they are excited to welcome Cooper as their leader. In her eighteenth year at Northgate, physiology teacher Cori Starr said she is looking forward to this year.

“The woman has boundless energy,” Starr said. “She makes connections with people very easily and she brings people together. We feel more unity, as a school and as a staff.”

In fact, Cooper displayed some of that unity one Tuesday in October when she returned to the classroom – on Zoom – and filled in as a substitute teaching Starr’s physiology class. It’s not too many students who have their principal as a teacher for a day.

Cooper brings a past with diverse experiences, which she enthusiastically describes. Before working in schools, Cooper taught dance camps “all around the world” and even worked for the X-games one year. “I was their trainer for aggressive in-line skating,” she said, laughing at the memory. “It’s like rollerblading on steroids through bales of hay. So much blood. So much road rash.”

Retired from the X-games, Cooper is a certified athletic trainer who said she still loves sports medicine. “That’s going to sound bad, I love injuries!” Her free time consists of choreographing for local regional musical theatre and biking. She even used to get her exercise from experience on a flying trapeze.

The Mt. Diablo Unified School District is weighing options for a return to school and considering a January phase-in to in-school learning. Reopening schools will be difficult, as there is a “lack of control over certain decisions and what that means in being unable to meet everyone’s needs,” Cooper said, adding that she expected the return to school to be a “slow phase-in.” Cooper, Bocks, and Ravina are working on plans for how this will happen safely when the district announces a plan.

Many parents throughout the district are asking for schools to reopen, while others are more cautious about the threat of a virus spread and may choose a permanent distance learning option. Speaking from the viewpoint of parents in her position as president of the Northgate Parent Faculty Club, Emeline Thompson praised Cooper’s transition and credits her with a smooth start to the year for families and students.

“As principal of Northgate High School, Kelly Cooper has established an open, consistent, and reliable communication line with parents,” said Thompson, parent of a junior. “Her commitment to making the best environment for the NHS students is apparent through her dedication and hard work.  Her leadership and transparency have made a school year laden with anxiety much more navigable.”

Meanwhile, Cooper says, the “administration is here every day, serving as tech support, substituting in classes, monitoring student progress and wellness, and planning for the next phase.”