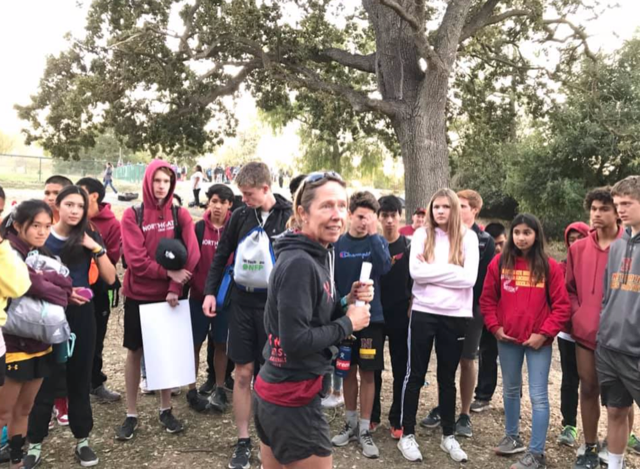 Coach Ruth Seabrook (center) gives advice to her runners during the 2019 season before they begin their training.

Cross country is the first sport of the new school year to win an award – not for a race on hilly terrain, but rather for a dedicated coach.

Seabrook came to Northgate as an assistant about eight years ago after coaching adults, and she took over in 2017 as a head coach. Although officially Seabrook is the girls’ team coach, she works with all runners. The NFHS recognized Seabrook and eighteen other coaches for the North Coast section of this award.

Many credit Seabrook for her skilled coaching in running, and for pulling the team together during an unusual beginning to the season. Even in a pandemic, where safety precautions make exercise challenging, Seabrook manages to train all her runners using Strava, an online run tracker, and through unifying reward systems. For example, when a runner reaches a total of 100 miles, she rewards them with a t-shirt emblazoned with “Running Miles Apart, Together at Heart,” the team’s motto.

About 50 students have been training with the team, broken into four “cohorts” to abide by county social distance regulations due to COVID-19. One team member shared his experiences with Seabrook and praised her excellent coaching skills.

“I remember being blown away many times by how knowledgeable and helpful she is on so many issues, related to running or not. She expects a lot but always listens to us and helps us through our difficult workouts,” said junior Evan Leach, a three-year member of the team.

Seabrook is also heavily praised by some of her more junior runners. “Coach Ruth is really great at pushing us to do our best, challenging us to go harder, and encouraging us to do well in our races. It is awesome that she is being awarded for all of her hard work as a coach,” said Alyssa Bradburn, a sophomore and two-year member of the team.

Seabrook’s shirts – which nearly all participants have earned, with some clocking as many as 700 miles – are one show of unity that keeps the team connected. Other efforts come from Seabrook herself as she does her best to empathize and adapt to each of her runners to keep them motivated and improving.

“If you have 80 runners on the team, you probably have to create 80 different coaching methods to unlock the potential of each of them,” Seabrook said. A top priority has been to “develop a team culture where making mistakes is seen as a good thing, where you can use them as opportunities to change and grow,” she added.

As a final note Seabrook, a runner herself, says she tries to always listen to others.

“When you are working hard alongside another runner you have a greater sense of purpose,” she said.

Solid words for running – and for life.