"It's no surprise that these are stellar students. All five of them have distinguished themselves as outstanding people, musicians and intellects in the music classroom. I'm so very proud of them. - Instrumental Music Director Greg Brown 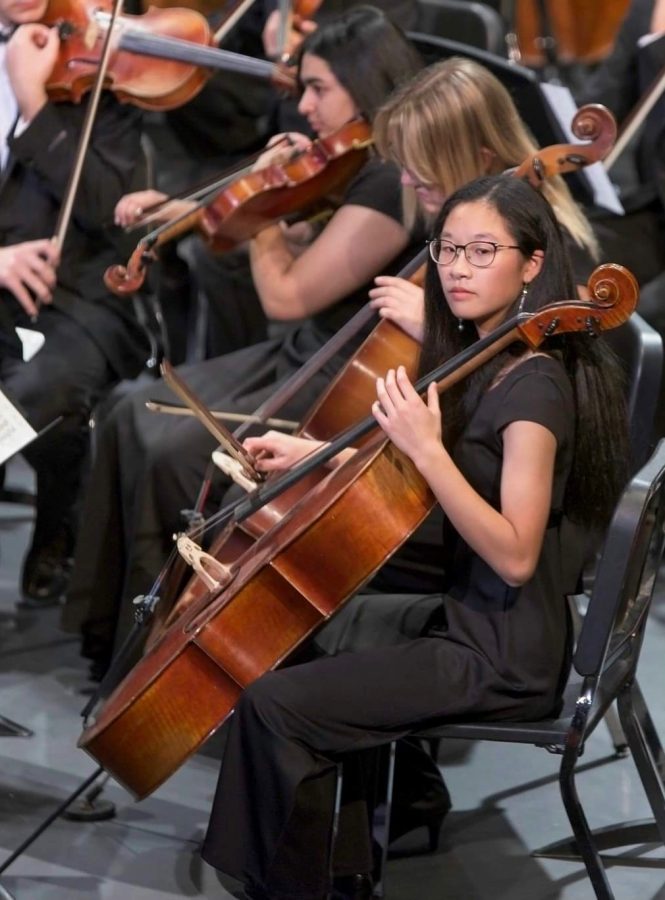 Natasha Lee, performing on cello in December 2019 with Northgate's orchestra, is one of the school's five seniors who earned the National Merit Semifinalist distinction. Finalists will be announced in March.

As the school moves into finals, there is a small group of students that has already received one prestigious report card this school year.

Of the 1.5 million high schoolers who compete to be National Merit Semifinalists, 16,000 receive the honor. Northgate has the distinction of having five hard-working seniors with this title:  James Arona, Alexis Balashov, Natasha Lee, Ingrid Nordberg, and Caroline Wang.

“I feel honored that my efforts were acknowledged like this, and I’m grateful to my family for supporting me throughout high school and encouraging me,” said Natasha Lee, who is a four-year member of orchestra and also has served as a tutor for Northgate’s peer tutoring program.

The National Merit Scholarship Corporation is a program that is designed to recognize academic greatness in high schoolers across the nation and if a student is acknowledged by this program, it shows signs of intelligence in that student, and can lead to benefits for their future.

To be considered for this opportunity, high school students have to take the Preliminary SAT/National Merit Scholarship Qualifying Test, otherwise known as the PSAT/NMSQT®, usually in October of their junior year. The PSAT/NMSQT is administered by the College Board testing centers at high schools or other local testing sites and is formatted similar to other versions of the PSAT. The tests are graded by the National Merit Scholarship Corporation. Fast forward to September, when those juniors who took the PSAT/NMSQT have entered their senior year, and this is when the top scoring students are alerted that they are officially National Merit Semifinalists.

The excitement does not stop with this nomination. In February, the students find out if they have become finalists. Out of the 16,000 semifinalists, around 15,000 will become finalists and could potentially become a National Merit Scholarship Award winner.

This decision is based on a multitude of considerations in addition to their test scores, including academic records, extracurricular activities and recommendations from the high school administration. The finalists receive notice of their status starting in March, and they could receive anything ranging from honorable mention to $2,500 in scholarship money, which is funded by sponsoring corporations.

When asked about her first reaction to finding out the great news, Caroline Wang called it “surreal”. “I didn’t go into the test thinking that my score would get anywhere near the requirements, so I didn’t even check the results when they came out,” Wang said. “It still feels really fake, to be honest, kind of like a fever dream. That’s pretty much in line with the rest of quarantine, though.”

Recognition by the National Merit Scholarship Corporation is a prestigious honor, one that also symbolizes dedication to academics and study.

What are these students’ academic secrets?

“I agree with those phrases teachers love to say: ‘Start early, don’t cram, don’t stay up late the night before,’ ” said James Arona, who is also a musician in jazz and concert groups. “Constantly ask questions: ‘What is this? Who uses it? Who made it? Why does it work the way it does? Why am I being taught this? How will or can I use it?’ Find something, anything, about the topic that interests you and latch onto it.”

In fact, the students have had one common topic of interest during their time at Northgate: all have participated in the music program. “It’s no surprise that these are stellar students,” said Greg Brown, director of Northgate’s six music groups and the chair of the performing arts department. “All five of them have distinguished themselves as outstanding people, musicians and intellects in the music classroom. I’m so very proud of them.”

No one is happier about the accomplishments of these students than Principal Kelly Cooper.

“We are so proud of our students and their work to achieve this honor,” Cooper stated. “It’s a huge accomplishment to place in the top 1% nationwide! Remember their names! Outstanding work, Broncos! I have no doubt they will continue to impress and inspire.”