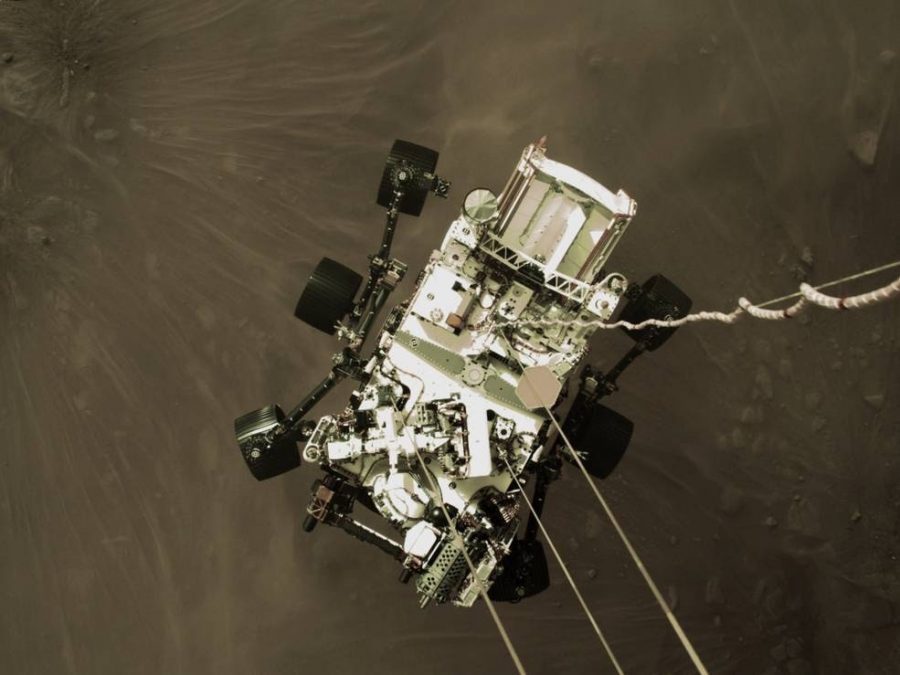 A still image taken as NASA’s Perseverance rover landed on Mars on Feb. 18, 2021.

Ten years from now, high school biology students might have more curriculum content from space – Mars to be specific – if the recent launch of space exploration is successful.

On Feb. 18 at 12:55 p.m, NASA successfully landed the rover Perseverance onto Mars. After traveling approximately 293 million for about seven months, Perseverance’s spacecraft reached its new home. The Jet Propulsion Laboratory in Pasadena, California, stressed for seven minutes, dubbed ‘the seven minutes of terror’ as Perseverance performed a fully autonomous landing in Jerezo Crater.

The rover is equipped with 19 cameras with the capability to capture images in color (the most any rover has had to date) as well as more advanced research equipment. One of the main objectives of Perseverance’s venture on Mars is to search for any traces of ancient life. The rover will collect samples of soil and rock and hopefully take around 30 samples back to Earth in a decade for further studies.

What this opens up for study and learning, only the future can tell.

“I think the Mars landing is incredible,” commented biology teacher Sean Kwirant. “Mars has long been a question as to if life could be discovered there.  These missions will help answer those questions. If life, or its remnants, do become discovered, it will change biology as we know it. We could come to know that life can exist beyond our biosphere.”

Scientists believe that the Jezero Crater is where an ancient lake might have once existed. With the geological samples, researchers will be able to find any signs of previous microscopic life forms on the red planet. The rover will also be collecting more information on the planet’s climate and atmosphere. Scientists can expand their knowledge of Mars and the possibility of inhabiting life.

Want to read more on the Rover Landing? Here are some links: