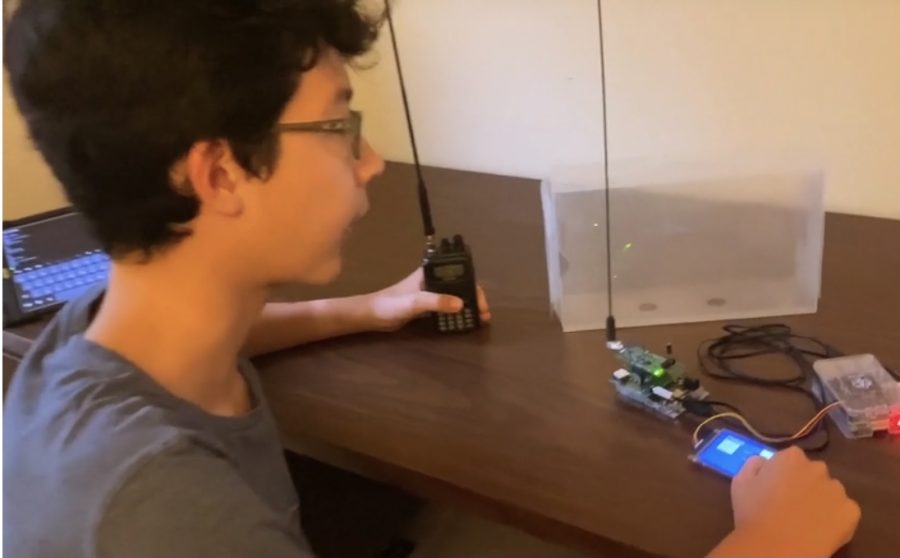 Freshman Sean Donelan is one of 6.500 teenagers to enter the 2020 Congressional App Challenge, and one of 308 nationwide winners. Donelan demonstrates his app here as part of a video posted to the contest website. For a demonstration, click link at the end of article.

Some people adopted pets during the 2020 quarantine and stay-at-home order. Others worked out or picked up hobbies such as painting or playing an instrument to keep themselves busy. And it would be hard to find someone who didn’t binge-watch their favorite streaming shows or became video game experts.

According to a website dedicated to the challenge, Congressional leaders started planning the annual contest in 2013, and “through House Resolution 77”, the U.S. House of Representatives outlined the plans by which Representatives would host district-by-district computer science or ‘app,’ competitions every year for students. This was approved in 2015.

In 2020, 308 Members of Congress held district contests and Donelan was one of 6,500 students who registered for it. The contest resulted in 3,088 “functioning apps” in what organizers called an “extremely successful” event during the COVID-19 pandemic, according to the Congressional App Challenge website.

In January, when winners were announced, he stated for the event website that he “experienced firsthand the complexity and convoluted ways of running an Amateur Radio net at local public service events, such as the Walnut Festival Twilight Parade, Mt Diablo Challenge Bike Ride, and Diablo Summit Stomp. To remove some of the tediousness of our Ham Radio volunteer’s tasks at these events, I created this app.”

Donelan has been busy completing competition for Cross Country and starting Track and Field. He is a member of an amateur ham radio club. He also serves as a writer and editor for the Sentinel. Recently, he made time to be interviewed about his technical achievement.

Q: What is your app and what does it do?

A: Amateur radio operators respond to public service events by setting up communications networks referred to as “nets”. These nets consist of a net controller, who relays information, and a set of scattered field operators, who coordinate the event on the ground. My app assists the more tedious and humdrum tasks of the net controller with a completely automated system. This is to save the time of the net controller who could be doing more important work.

Q: What was your initial inspiration for creating the app?

A: I partake in these Amateur Radio public service events through my local amateur radio club (MDARC). When at these events, I noticed the tedium and frustration of having to check-in to the nets at these events. This served as inspiration for my app.

Q: How did you find out about the competition?

A: Last year a Las Lomas student named Emily Xie created and submitted a brilliant app that helped the elderly. I heard about her win, as she is in the same congressional district as me. This prompted me to want to build and submit my own app to the Congressional App Challenge.

Q: When did you start preparing?

A: I started preparing around the summer of 2020.

Q: How long did the whole process take you?

A: The whole process of designing and building my app took about the entire summer of on and off development.

Q: Were there any setbacks or obstacles that you encountered?

A: There were mostly technical obstacles I had to overcome which arose from somewhat poor decision making, like using node.js as the main programming language on the microcomputer, and other engineering constraints, like making the device portable enough for field use.

Q: What are your plans for the future with this?

A: In the future, I want to refine my app with the help of my fellow amateur radio operators to make it more feasible in a real public service situation.

For information about the Congressional App Challenge, go to