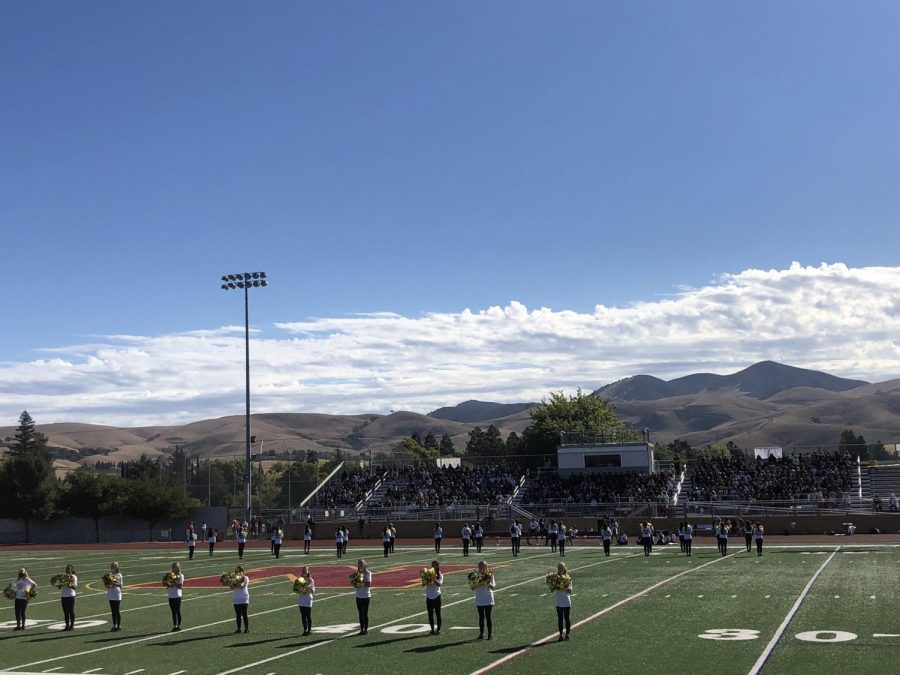 Students and staff gather at the sports stadium Sept. 10 for the first rally in nearly two years with juniors and seniors, pictured in background, on the home side of the field and freshmen and sophomores, not in picture, on the visitors' side of the field.

One of the most traditional high school events is the rallies and after a year and a half of distance learning, Northgate finally found a little bit of normal in a very big setting.

Northgate’s first rally in over two years took place on Sept. 10. However, instead of the traditional event with students from all four grade levels squeezed into the gym, it was held outdoors at the sports stadium for the first time ever due to social distancing restrictions.

Seniors and juniors sat separated by grade level in the Northgate side of the stadium and freshman and sophomores sat with their respective classes across the field in what is usually the visiting team’s bleachers.

However, there were still some revered traditions including a competition between the grades to see which grade level in their respective places in the stands could cheer the loudest, the school’s marching band blaring the Bronco fight song, dance performances, and an introduction to all of the fall sports representatives.

All of the captains for the fall sports teams stood on the sports field and held posters displaying their team pride. Cross Country went above just cheering when Evan Leach, a senior captain of the team, held the poster with his arms straight out and ran an entire lap around the track, the wind holding the poster to his body.

“I knew beforehand that we were going up to show off our posters,” said Leach, when asked what prompted him to run the quarter-mile during the rally. “I thought it would be cool to run around so that was sort of a last minute decision. I asked some guy if I’d get in trouble and he said I wouldn’t get in trouble.”

Andrea O’Neill, one of the junior rally commissioners, helped organize the event. “It was definitely more challenging to plan outdoors given the changing variables of what we were and were not allowed to do in a new location,” O’Neill said of the challenges in staging the outdoor rally for about 1,600 people outdoors. “It was also tough to figure out how to perform and get audio to two sides of the bleachers. The weather ranging from rain to unbearably hot was also a factor we had to organize.”

Principal Kelly Cooper said she was thrilled to see the school together. “The fight song is one of my favorite things, period!” she enthused. “I love our student sections standing up, jumping and chanting with the fight song – it is a great  tradition.”

With shorter periods throughout the day, school administrators modified the daily schedule to include the rally after the second period and before brunch. Students said they enjoyed this rally.

Sophomore Peter Galbraith has never been to an in-person rally due to his freshman year being completely digital. He said the rally was, “very energetic. Evan was the star of the show.”

Junior Chloe Mannion has now experienced both an indoor and outdoor rally. When asked her preference, she said, “I prefer the indoor rally because it’s easier to hear the music and watch things up close.”

O’Neill added, “I really enjoyed the rally from my perspective. While it was not flawless, it was definitely fun, and I think that is the most important part of rallies in the first place.”