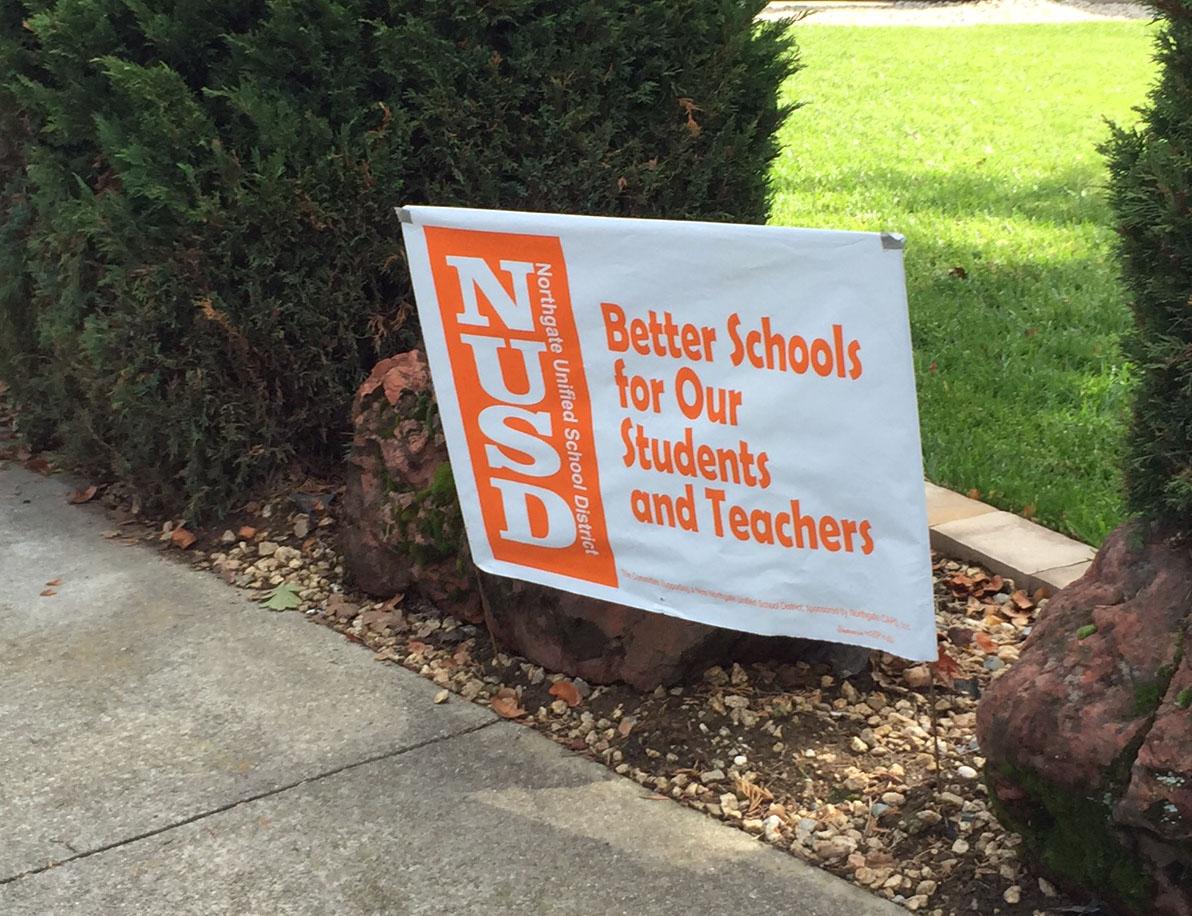 A Walnut Creek household shows their support for the new school district with an NUSD sign. (Megan Son)

A Walnut Creek household shows their support for the new school district with an NUSD sign.

With the local and national political season drawing to a close, signs for presidential, city council, and school board elections are coming down. However, one orange and white sign is cropping up for an issue that is not yet on the ballot, one that could have significant effects for Northgate High School as well the entire Mount Diablo Unified School District.

Grassroots efforts have been in full swing to create a Northgate Unified School District. Proponents claim a new, smaller district would increase local control, which is “essential in the success of our public schools. The new district was proposed by the Northgate Community Advocacy for our Public Schools, a non-profit community group that was started in order to transfer students within the existing attendance boundaries of Northgate High School, Foothill Middle School, Walnut Acres Elementary, Bancroft Elementary, and Valle Verde Elementary into a much smaller district. The new district would be composed of five campuses with 4,600 students, a distinct departure from the magnitude of Northgate’s current district, the Mount Diablo Unified District, which houses 50 campuses and over 30,000 students.

CAPS president, Linda Loza, described the process necessary to make the district a reality: “We kicked off our petition drive on September 10 and must collect just under 5,000 qualified signatures of registered voters living within the new district boundaries by the end of February.” The first possible school year for the Northgate Unified School District would be 2019-2020 and the voting area would be determined by the County Board Of Education and approved by the State Board of Education.

Loza detailed the beneficial effects of NUSD. “Every decision made along this process is about minimizing impact to students and teachers,” said Loza, whose two children graduated from Northgate in 2010 and 2013. “By creating a Northgate Unified School District, we create a smaller school district better able to meet the needs of our students and teachers. For teachers this means having a greater voice in textbook adoption, curriculum, professional development. For students it means that decisions are made at a local level by a governing board elected by the community with the needs of the students and teachers as their top priority.” Loza states there is no specific reason to pinpoint as a trigger for this movement but rather a series of “disappointing decisions made by MDUSD leadership” observed by proponents of the new district over the course of several years. Loza says, “It is difficult to be accountable to a district of 32,000 students and over 4000 employees.”

Others, like geometry teacher Lee Cyr, are less enthusiastic about the prospect of a new district. Cyr, a union representative, explored the numerous challenges of moving Northgate from MDUSD to a significantly smaller district. It must be noted that neither Northgate teachers nor the union that represents them, the Mt. Diablo Education Association (MDEA), has heard a formal proposal or taken a formal position on the issue.

“My first thought about the NUSD proposal is that it would be a huge undertaking to produce an entire school district from scratch. From a new school board on down, personnel would have to be hired and organized to form such a district, essentially duplicating the functions of the MDUSD, which are already in place.” Cyr said. “Secondly, a larger district can offer more specialized services such as continuation high schools, personnel dedicated to assisting and coaching teachers in specific instructional areas, as well as multi-functional areas like the Willow Creek Center.”

Cyr also questioned whether change is truly necessary. “Since our schools are already highly rated, one has to wonder what is so ’broken’ that requires a solution as radical as forming a new school district?”

If this change were enacted, it would have extremely significant implications for teachers. “Current teachers would have an option of staying at their school site or moving to a school that would still be in the MDUSD,” explained Cyr. “It appears that many, if not most, of our teachers would chose to leave Northgate, to stay with the MDUSD.” This is due to the concern that “a newly formed union would not have the same long standing, established relationship with the new district” that teachers have with MDUSD. Uncertainty of the policy and abilities of a new district also contribute to teachers’ preference to remain in Northgate’s current district.

Loza said a smaller district would not alter teachers’ pay or pensions and would honor existing employee contracts. “All of us involved in this effort recognize how important competitive salaries and benefits are to retain and attract good teachers and staff,” she said. “There is no reason to believe any programs will be eliminated and instead teachers and students should see a smaller, local district as a better partner for implementing programs desired by the school sites.”

Cyr acknowledged the viewpoint of the movement’s advocates, but believes firmly that the aforementioned reasons as well as numerous others signify that “we should be cautious in considering the NUSD proposal”.

“Best intentions and assurances don’t always come out for the best,” Cyr warned.