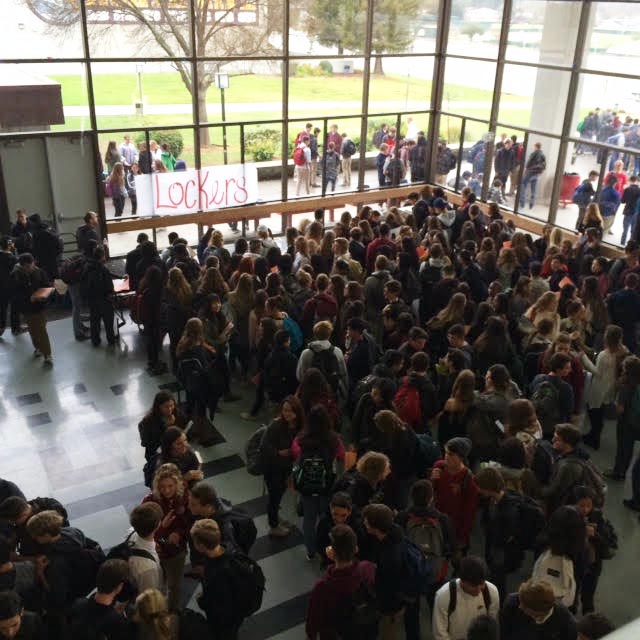 Students crowd in the forum during the first day back at school as they wait to receive their new lockers.

Out with the old in with the new. That’s the motto not only for the new year, but also for the lockers at Northgate. Student returned to school on Jan. 3 to shiny, new lockers in place of the old 42-year-old ones.

The lockers didn’t change in location, size, or design and, best of all, no one will have to share with a partner. They were installed over winter break.

“Hundreds of our current lockers do not work, meaning many students do not have their own locker,” Vice Principal Ben Campopiano said in December. “This is a concern and frustration that students have voiced over the years, so we’ve been working to get new ones for quite some time now. Our goal was to make sure every student had their own locker.”

“I think the lockers give the school a nicer, newer look and take some years off the school,” said junior Kayla Nelson.

Campopiano said the lockers are part of a school upgrade. He added that Principal Michael McAlister had been requesting these lockers for the last two years and administrators are pleased the district is funding them.

Locker assignments were distributed when students returned from winter break. Freshmen and received their assigned lockers during their PE classes. They had time to move their belongings into the new ones from their PE lockers, where they had placed their belongings over winter break. Juniors and seniors received their locker assignments in the forum before or after school or at brunch or lunch.

By Jan. 4, the second day back from break, most students seeking lockers already had them.

“All students got a locker by the end of the day on Tuesday,” said Campopiano.

The mostly smooth transition had a few glitches. Juniors and seniors, who expected to receive top lockers after being told they would by teachers and administrator, initially found themselves given lockers at random, including bottom lockers. Complaints to McAlister resulted in action, and he gave word that upperclassmen could exchange their locker assignment if needed.

“I was really annoyed because I’ve had a bottom locker for the last two years, so the fact that I might have to wait another year to get a top locker, really bugs me,” said junior Kelly Hamed when she received her assignment; she was pleased when she later returned to the distribution line for a switch.

Some students find the locks, no longer built into the locker door, getting stuck, but most are pleased. “I miss having my locker next to my friends,” senior Nate Greene said, adding that his previous locker was next to those of four friends. “It really is a more appealing look for Northgate.” Students and faculty see the new lockers as a huge improvement for the school and look forward to putting them to good use for many years to come.