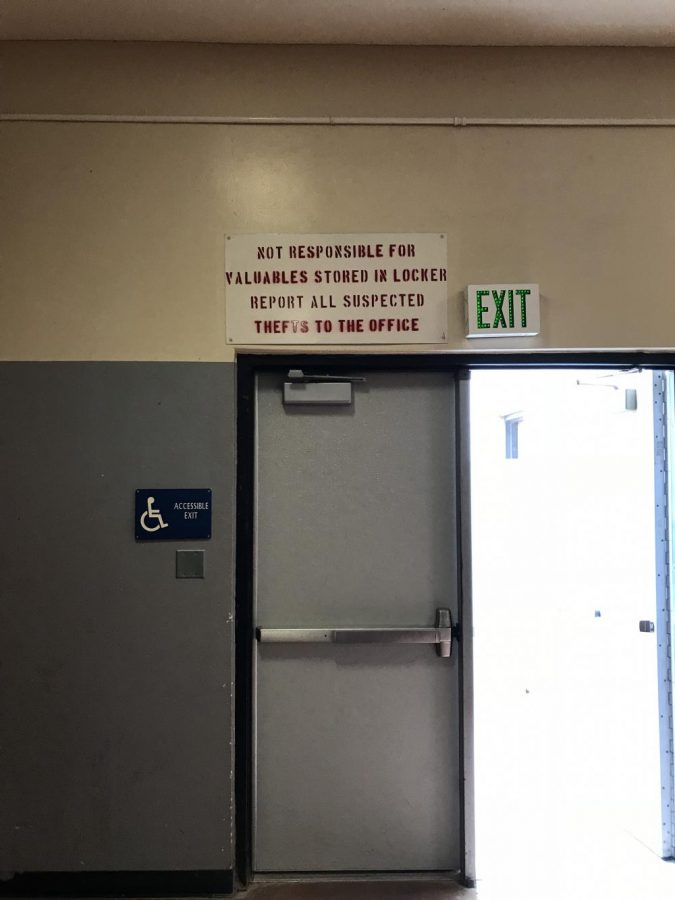 Warning signs are posted in locker rooms of the gym to remind students to report lost items.

Hold on to your Hydro Flasks: Student theft plagues school

Hold onto your Hydro Flask. That sounds like an easy task, but students have learned they are a hot item that others – their own classmates – will steal if given the opportunity.
Senior Julia Bender was heartbroken at the end of the Battle-of-the-Creek game rally in September when she realized she was a victim of a Hydro Flask theft. The bottle, a gift from a friend, was stolen from the side pocket of her backpack at her feet.

“It made me sad and I worked hard to earn the money to buy my Hydro Flask. It makes me unable to trust Northgate,” Bender said.

Principal Michael McAlister said administrators are aware of the reports. School officials are moving the bicycle racks closer to the school building and writhing range of surveillance cameras. He also urged students to take extra care in awareness of personal items and to report theft as it occurs, no matter what the item.

“The single most important thing we can do as administration is to make sure students are safe,” which includes protection of personal items, stated McAlister.

He pointed out s positive note. “One of the things that always impresses me is the number of cell phones turned in by honest people,” he added.

The popular bottles in bright colors have a double-wall vacuum insulated stainless steel that keeps water cold all day, and a 32-ounce bottle sells for about $50.

Senior Emma Smethurst also found out the hard way that people will steal when opportunity presents itself. An October trip to the girl’s bathroom was the last time she saw her teal bottle, which was in the side of her backpack. “I put down my backpack, went to the bathroom, and when I went back to get it my Hydro Flask was gone,” Smethurst said.

Phones, bikes, shoes and money are items students have reported stolen this year and in the past, according to students.

Freshman Nelmarie said last week her friend’s Birkenstock shoes, a Hydro Flask and money were stolen from a PE locker.

“My phone was stolen last year,” junior Ravyn Lee said. “I accidentally left it on a table in a class at brunch for 30 seconds – I went back and it was gone.”

Junior Toria Stahl said she believes her Hydro Flask water bottle was taken out of her backpack while she was walking from her math class to lunch. “It was in the side pocket when I left math class and when I got to lunch, it was gone.” she said.

“People think their PE locks are locked, and people go through and pull the locks open,” Delaney Cook said.

Students have long suspected that people sneak into the locker rooms during class or after school looking for locks that might not have clicked completely shut. However, earlier this month a thief hit the music room during an afterschool rehearsal.

Senior Max Aguilera recently asked his AP English class for help in providing any knowledge about a band room theft after school in early October. While Marching Band members were practicing, someone rifled through backpacks and stole money equaling about $300, he said.

Earlier this year, a student’s bicycle was stolen from the bike racks after a lock was cut, according to social media reports.

Students say it is important for people to know that school is not as safe as they might think. Inadvertently leaving something out in the open or on a locker might mean it will be gone.

“Be cautious – you can’t trust anyone,” junior Delaney Cook said.

“Be self-aware before leaving a class,” added Mettler as a word of advice.