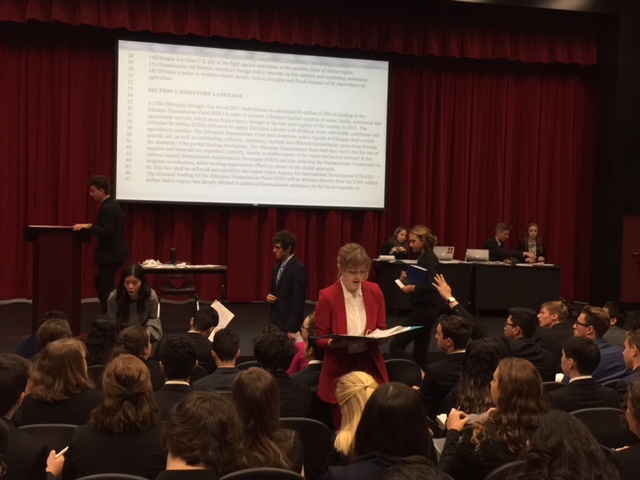 Mackenzie Champion, a senator with the Stars Senate in the Little Theater, takes the floor during Mock Congress debate and discussion Dec. 8. In background left, President Pro Tem Jack Casey oversaw the legislative action for the two days, and clerks and techs worked at the table right.

“My favorite part of Mock Congress was getting to hear everyone’s opinions and debating all the topics.” - Senator Karen Recinas

During a week in which members of U.S. Congress grappled with a controversial tax bill and saw three resignations as a result of sexual harassment accusations, Northgate’s five senates met for two straight days with its senators passing dozens of resolutions.

Mock Congress, the U.S. Government course’s culminating semester assignment, took place all day Dec. 7 and 8 after students spent a semester researching, writing and refining legislation. The seniors met as senators in five separate locations of the school, speaking for or against student-crafted resolutions, amending bills and voting just like the Washington, D.C. U.S. Senate process.

“My overall experience was okay because it was a little fun to do the simulation but it was hard to write all of the speeches and do all of the work leading up to it. I was also really nervous about speaking,” said Cassidy Carranza, a member of the Stars Senate, which met in the Little Theatre. “The most interesting piece of legislation was the Equal Treatment Act of 2017 just because people brought up valid points on completely opposing opinions so it really made you think about what was right.”

Kevin Clancy said there was a brief learning curve, but that his Red Senate operated well.

“In the beginning nobody really knew what they were doing and everyone would stand up to talk so that they would get talking points but the farther in we got the more heated the debates got,” said Clancy of his group, which met in room 32. “Being part of the Republican Party I was part of the minority but anytime our party would get a win on a bill we would all be super excited.”

“I enjoyed being able to listen to people and their opinions especially if they weren’t in any of my classes before. There were a lot of opposing viewpoints and arguments and I’m happy that I was able to be a part of something that our whole senior class worked towards,” said Tyler Stynes, a member of the Blue Senate, which met in the Lecture Hall.

“I enjoyed the assisted suicide debate. It was interesting and there were a lot of different perspectives,” said Eli Elster, a President Pro Tem of the Blue Senate.

“The best debate we had in the two days was over a bill discussing abortion. It provided federal funding for women wishing to have one and we debated for about 75 minutes. We ended up passing it by two votes, which goes to show that the topic tends to transcend party lines, at least to some extent,” said Michael Wheeler, President Pro Tempore of the Red Senate.

“I’m especially proud of the fact that we got everybody over their two speech minimum by brunch on the second day, which was a major focus for me, helped greatly by the awesome clerks I had,” said Wheeler.

One criticism – and possibly the only one heard in numerous responses from seniors – came from some in the Stars Senate in the Little Theatre. With over 100 people and the largest meeting group, it had as many as 40 more students than the some of the other Senates, and some students said they had a tough time getting called on to speak.

Stars Senate Democrat Whip Tracy Pan remarked, “With the high number of senators and contrasting opinions, it was difficult to involve everyone in the discourse for each bill. We used a tally system to keep track of each person who talked and passed notes to encourage those who hadn’t.”

Government teachers said they do their best to oversee the student-led process and to get students involved, and that this simulation is comparable to the experience of the real U.S. Senate, where it is a challenge to get equal speaking time on the floor.

Kevin Davis is one of the four U.S. Government teachers who guided students through months of preparation assignments including research, fact-finding, writing an essay and their resolution and “committee” work to refine, amend and select the bills to be discussed in Mock Congress.

“It was extremely smooth,” said Davis, who has been at Northgate for nearly 20 years. “It keeps getting better every year.”

Overall, students called the experience a chance to learn more about the government process and their classmates.

“My favorite part of Mock Congress was getting to hear everyone’s opinions and debating all the topics,”  Stars Senator Karen Recinos said. “It definitely showed me how diverse our class is-I thought my senate was really interesting and lively.”