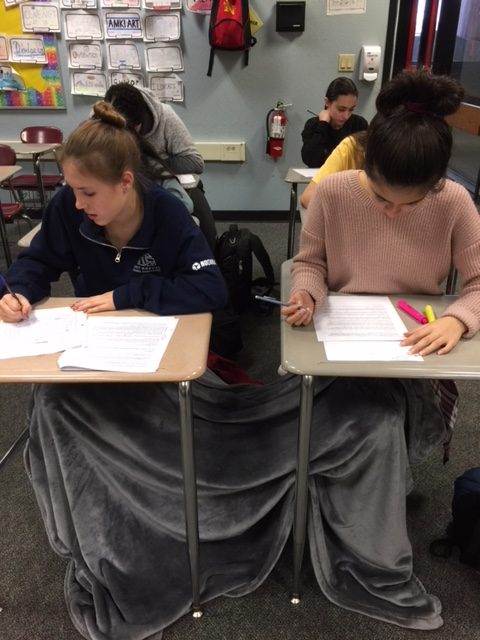 Nelmarie De Jager and Elise Garcia stay warm on Dec. 22 during their freshman English final, with Eliana Goldstein in the back right. For the first time, finals took place the three days before winter break. School is scheduled to start Aug. 16 in order for fall semester to finish in December 2018.

School will start one week earlier next year

Students will lose five days of summer after the Mt. Diablo Unified School District announced that the next school year will start Thursday, Aug. 16.

In a 3-2 vote, the board approved the proposed 2018-19 and 2019-20 academic calendars, which would start school about a week earlier in August, add an additional day off in January and February, and end school three days earlier. Officially, the 2018 school year will start on Thursday, Aug. 16 and end on Wednesday, June 5.

Following first semester’s December schedule change, the incentive behind this newly enacted calendar is to better balance the academic days of the two semesters. This year the first semester was 90 days and second semester was 103, but next year the two semesters will be more similar in length. There will be no change in the total number of school days. For example, the district will have additional school days in August, but fewer in June.

Because the last day of school falls no earlier than usual for the current school year, the 2018 summer vacation will be about a week shorter than usual. However, 2019 and 2020 summer breaks will be the same length (roughly ten-and-a-half weeks) that it has been in the past.
Some students who were looking forward to the glorious ten weeks of paradise previously allotted for vacation expressed discontent with this decision.

“I think that students work really hard in school. It’s not fair to take vacation time away from us, even if it only impacts students this particular summer,” said junior Rachel Fairweather. “This time is our reward for our completed work; it is a time to relax and reboot. We do not only deserve it, but need it.”
Other students and administrators strongly agreed with the decision.

“With school starting on Thursday, students can better ease their way back into the school year. We will not have to endure a full week of school immediately following summer vacation. For this reason, I am in favor of the new plan,” said sophomore Jacalyn Schick.

Northgate’s Principal Michael McAllister is also supportive of the calendar change. “Any idea that supports student achievement, I’m in favor of,” stated McAllister.