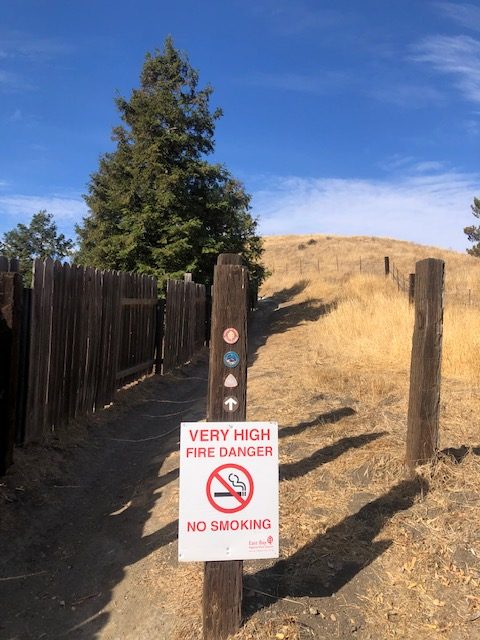 August fires bring smoke and unhealthy air, which have become expected during summer and fall in California

In the early hours of Aug. 16, California marveled in the frightening beauty of a dry lightning storm. Just hours later, the state would go up in flames.

The August Fire Complex is often considered the worst of the fires, burning just over 1 million acres of land as of Nov. 2. That alone is larger than the size of Rhode Island. Yet hundreds of other fires have burned late summer into fall, including the LNU Lighting Complex Fire, which turned almost 1500 buildings into ashes in the Napa and Sonoma area.

In total, the devastation has cost more than 80 people – including some firefighters – their lives and burned over 4 million acres in less than three months.

Walnut Creek and Concord have been spared from the harrowing effects of the fires this season, such as the loss of life and homes, but the aftermath still looms above. Smoke from the surrounding areas blew into Contra Costa County in a matter of hours after the eruption of blazes, forcing youth and others to lose what little time they spent outside.  Spare-the-Air days, determined when the air quality index falls beneath a certain level deemed healthy for people, went on for a record-breaking number of thirty unhealthy air days straight and in October reached more than fifty days for 2020, a state record.

Close by, on the other side of Mt. Diablo, the Deer Zone Fire brought on by dry lightning Aug. 16 burned for a week in the Round Valley Regional Preserve, scorching about 375 acres of mostly vegetation. Fire officials briefly evacuated residents south of Marsh Creek and Morgan Territory roads and smoke billowed into central Contra Costa County. The East Bay Regional Park District has not reopened the park, which is popular with hikers and horseback riders.

Despite these unprecedented times, students and others say they are accustomed to the ever-changing world and weren’t affected by the fires.

Senior Lauren Fong said she recognizes how fires have been affecting others and is grateful to be safe. “I was really upset and really sad for [the people in the fires]. But, I definitely don’t want to say I was really super upset for myself because it really didn’t affect me. It was affecting other people way more than it was affecting me,” she reported.

When asked about the air quality sending people indoors, freshman Noah Bettelheim said he is adjusting. “I’ve kind of gotten used to it over quarantine, of literally not being able to do anything,” he said.

While the majority of Walnut Creek residents were exempt from the fires, many were not. Robert Mitchel, a current student-athlete at the University of Wyoming, used to swim on the Walnut Creek Aquabears’ year-round team. He was considered a member of the Walnut Creek community but lived in Napa, which is a 45-minute drive away.

Though he couldn’t report on the most recent fires, he explains his experiences within the fire season in past years to give better insight as to how communities within the danger zones may feel.

“It was shocking to see an abundance of fire. It got so close to my house that we were in a state of possible evacuation,” Mitchell reported. He explained the uncertainty and fear that surrounded the community. When asked further about the effects the fires had, he said, “I had a lot of friends who lost their houses. One of my best friends had to live with me for a week because they didn’t have power at their house and the fire was about a mile away.”

Additionally, Mitchell talked about his parents, who were put in serious danger. “My dad runs a transit system in Santa Rosa. He had to have his buses go places and evacuate retirement homes, hospitals, stuff like that,” Mitchell explained. “So, his buses were in severe danger, driving through tunnels of fire. So there was a lot of concern about like, ‘Will he be okay?’ I mean, I know he can take care of himself but you never know. The fire doesn’t care who you are, it’s gonna do what it wants to do.”

Indeed, the fires have done what they want, chasing all over the dry, California planes. John Litten is the drama teacher at Northgate. In addition to inspiring his students, Litten runs a business called the “Young Actors Project,” which is located in Malibu, California.

“In years past, especially down in Los Angeles, my business almost burnt down, where I was running my acting school out of,” Litten said. “I had three friends who lost their homes, who lost their pets, and are really struggling to make it.”

Aside from the direct and frightening effects of the fires, Litten also describes smaller issues that had an impact on him.

“It’s depressing. I have noticed that at the height of the fires I had massive headaches and I couldn’t drink enough water. I’m also a runner-to blow off steam, to decompress, to just be with myself. I love to go running in the hills and it was really hard to run. I am isolated in a little apartment that I teach from and then I got trapped here even more,” he said.

Mitchell, who was in the center of the fires, talked about how many people have acted regarding the spreading fires. “It just shows that in society that if something doesn’t immediately affect us it isn’t a big deal to us,” Mitchell said. But the moment it starts affecting us on a personal scale, we want all this support.”

Recognizing the impact natural disasters have on people is essential. The Walnut Creek area was basically unaffected by the fires. Yet the rest of the state continues to go up in flames, impacting thousands of people both physically and emotionally. Litten talks about his love for the environment and his sadness at watching it burn.

“People smoke cigarettes and then throw them out the window. It upsets me because I don’t really care if people smoke, but you need to know you can’t do that. It’s going to create this huge problem for all of us. We just need to develop a certain level of awareness,” Litten said.

Even on Nov. 3, more than 4,100 firefighters are working to combat at least 22 blazes. We owe thanks to the first responders who risk their lives daily. There are multiple fundraisers available, including the California Fire Foundation, and the American Red Cross, which responds to fires across the United States. It is our duty to protect our neighbors and recognize the events happening in our community.