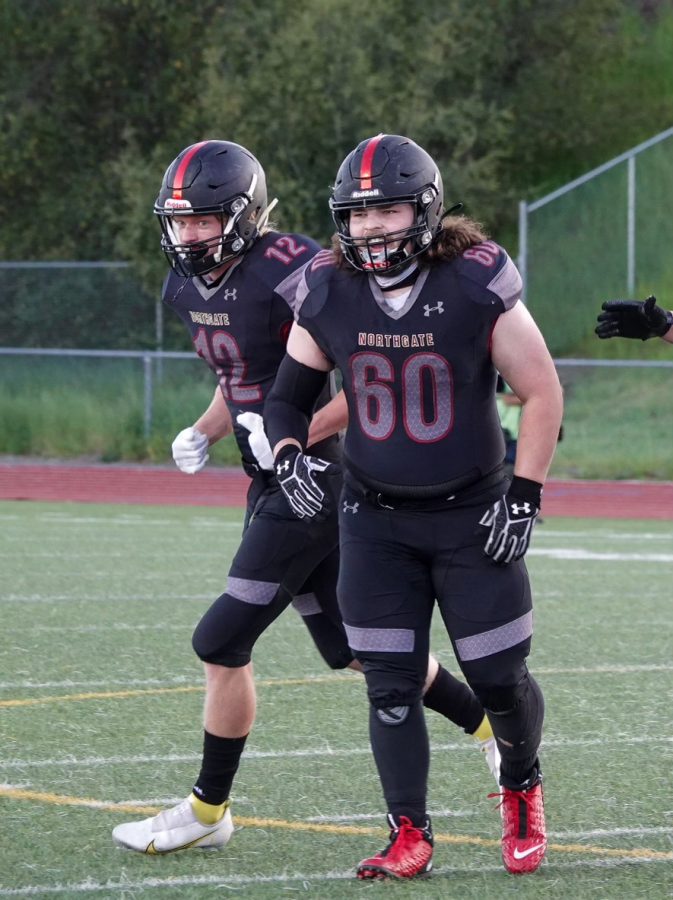 Seniors Andrew Daigle, left, and Cooper Champion are two of the varsity Broncos who will be on the field April 2 for the first home football game. Junior varsity plays at 4:40 p.m. and varsity kicks off at 7 p.m.

Northgate’s varsity and junior varsity football teams will take to the home field for the first time Friday, a delay of seven months from the start of the usual fall season. The teams play Vallejo’s St. Patrick High School. Junior varsity will kick off at 4:30 p.m. and varsity at 7 p.m. The night is also “Senior Night,” and will recognize seniors participating in football, Sports Medicine, Cheerleading and Dance teams.

The football teams have practiced under social distance guidelines and have played twice, beating Alhambra High School in Martinez on March 19, 34-13, and beating College Park in Pleasant Hill on March 26, 28-8. With social distance rules in place, only two spectators per player who reside in the player’s house are allowed, which is the same for all sports. Northgate will livestream Friday’s game on its YouTube site.

One captain said on Thursday the team is ready to play. “Our goal this Friday is to compete and beat our biggest opponent in our conference, which is entirely possible as long as we do our jobs to the best of our ability,” Daigle said.

The teams also have games scheduled for April 9 and 16. See related sports story in the Sentinel for other season sports highlights, and also for links to calendar and sports information.

The Sentinel • Copyright 2023 • FLEX WordPress Theme by SNO • Log in